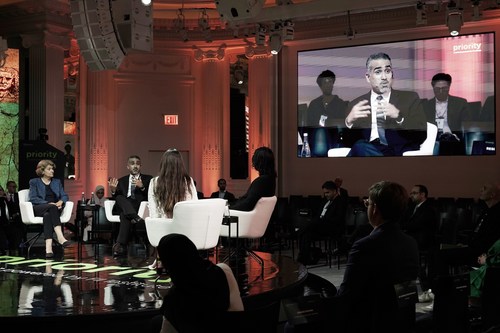 NEW YORK, Sept. 23, 2022 /PRNewswire/ -- The Cultural Development Fund (CDF) has concluded its participation in the Priority Summit hosted in New York City. The Fund's participation in the summit served as an extension of its goal to enhance Saudi Arabia's cultural scene and empower people and organizations within the sector.

Organized by the Future Investment Initiative (FII) on the sidelines of the 77th United Nations General Assembly, the Priority Summit was a part of a series of events aimed at encouraging open dialogue to uncover the top priority in the minds and hearts of individuals from all walks of life. The Summit's agenda consisted of a series of interactive conversations and debates amongst a range of stakeholders to discuss global challenges and find beneficial solutions that impact humanity.

As a primary financial enabler of Saudi Arabia's cultural sector, among other Priority Summit participants, the Cultural Development Fund took part in the Summit as an official strategic partner of the Future Investment Initiative.

More on Rezul News
During the Summit, Mohammed bin Dayel, CEO of the Cultural Development Fund, participated in a panel discussion titled The Neo-Renaissance, where he discussed CDF's role in attracting investment, empowering cultural sectors, and creating opportunities for the local cultural economy to thrive.

The Summit's guests also learned about how the CDF is supporting the private and public sectors to create a framework that empowers the cultural sector and ensures continuity. Throughout the Summit, the CDF highlighted how its plans align with Saudi Vision 2030's objectives to upscale nearly every facet of life in Saudi Arabia, including quality of life standards.

Bin Dayel also emphasized how the CDF's role integrates with those of other funds within Saudi Arabia's development ecosystem and their drive to achieve sustainable national development.

The CDF's participation in the Priority Summit is part of its strategy to attract local and international investment to assist in transforming Saudi Arabia's cultural scene, helping the country position itself as the destination for global cultural enthusiasts.

More on Rezul News
The Cultural Development Fund seeks to establish national and global partnerships, foster cooperation amongst organizations that have a presence in the Saudi cultural scene, and continue its strategic partnership with the Future Investment Initiative by participating in the sixth iteration of the Future Investment Initiative Conference, scheduled to be held in Riyadh from 25-27 October 2022.

The Cultural Development Fund is one of the key domestic enablers of culture, nurturing a cultural ecosystem that encourages investment, fosters sustainability, and instills culture as a way of life that boosts Saudi Arabia's national identity and meets Vision 2030's quality of life objectives.

The Fund aims to achieve these targets by creating a cultural ecosystem that contributes to the diversification of the economy through empowering and overseeing cultural projects, attracting businesses, and investing in strategic programs that help Saudi Arabia's cultural sector flourish and enhance its profitability.