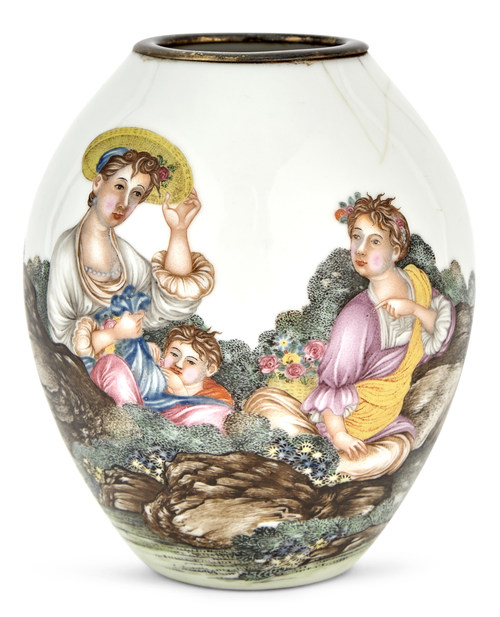 NEW YORK, Sept. 14, 2021 /PRNewswire/ -- Doyle Auctioneers & Appraisers will auction the Sarah Belk Gambrell Falangcai Vase as a highlight of the Asian Works of Art sale on Monday, September 20 at 10am EDT. Created during the reign of Chinese Emperor Qianlong (1735-1796), this rare and important vase was acquired by Belk department store heiress and philanthropist Sarah Belk Gambrell (1918-2020), from whose estate it is being offered. It has a pre-sale estimate of $100,000-300,000.

Following the auction on September 20, Doyle will offer Asian Works of Art: Session II on Friday, September 24 at 10am EDT.

Collectors around the world are invited to participate digitally in the two live auction events. Interested bidders can view the auction catalogues and place bids online at Doyle.com.

The public is invited to both exhibitions on view Friday, September 17 through Sunday, September 19. Doyle is located at 175 East 87th Street in New York City.

The Sarah Belk Gambrell Falangcai Vase bears a four-character mark in blue indicating its origin as a product of the Qianlong Emperor's imperial workshop. Among the many artworks produced by the imperial workshop for use within the Forbidden City, falangcai (or "foreign colors") wares are rarest. They hold the special distinction of having had to pass Qianlong's own inspection.

The techniques involved in creating, applying and firing the brilliant, jewel-like enamels were laborious. Relatively few falangcai wares were ever produced in the Qianlong Emperor's long reign (1735-1796). Of the small number of known extant examples, most are now held by major world museums.

More on Rezul News
Measuring 4 7/8 inches in height, the Sarah Belk Gambrell Falangcai Vase is decorated with a continuous scene of two European women and a child in a garden, reflecting the Qianlong Emperor's admiration for the European aesthetic. A prototypical European-subject falangcai porcelain vase on display at the British Museum as part of the Sir Percival David Collection similarly displays two women in a pastoral setting with a young boy. The Sir Percival David Vase provides the best and closest example from which to envision the proportion and possible design of the missing Sarah Belk Gambrell Vase's neck.

Though the significance of the Sarah Belk Gambrell Vase in terms of its history, quality and value in today's Chinese arts market makes it a singular highlight of her marvelous porcelain collection, it will never cease to be a study piece. It reveals in its subject matter the history of 17th and 18th century imperial court artistry. In its construction, one can begin to surmise the technical and conceptual skill required to create such a graceful scene in 360 degrees on a flawless olive-shaped porcelain body. Even its conspicuous loss invites us to envision the vase whole and in perfect proportion. How the neck was decorated – if at all – is the fair guess of any imagination.

The daughter of Belk department store founder William Henry Belk, Sr., Sarah Belk Gambrell spent her life as a trailblazer. Charting a path in a retail world run by men, she coordinated the women's wear and cosmetics businesses for hundreds of Belk stores across the South. In 1952, she married banker Charles Glenn Gambrell, and the pair maintained homes in Charlotte and New York. A generous philanthropist, Mrs. Gambrell was a tireless advocate for women and other marginalized groups nationwide, and in her native city of Charlotte. She served on the national, NYC and Charlotte boards of the YWCA and donated generously to the Mint Museum, Opera Carolina and the Charlotte Philharmonic Orchestra, as well as numerous cultural, educational, medical and social service institutions.

Fine English and Continental Furniture and Decorative Arts from Mrs. Gambrell's elegant home in the Eastover section of Charlotte and her New York apartment on Park Avenue will be auctioned at Doyle on October 13, and her collection of Old Master Paintings will be auctioned on November 10.

Founded in 1962, Doyle is one of the world's foremost auctioneers and appraisers of jewelry, art, furniture, decorations, Asian works of art, coins, stamps, rare books and other categories. Headquartered in New York City, Doyle offers auctions throughout the year that attract a broad base of buyers and consignors from around the world. Doyle operates a network of regional offices and advisors across the nation, including Palm Beach, Beverly Hills, Washington DC, Boston, Chicago, Connecticut, Long Island, New Jersey, Pennsylvania and North Carolina.