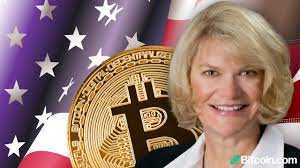 The passage of H.R.3684 - Infrastructure Investment and Jobs Act - introduces burdensome regulations to the blockchain & cryptocurrency industry which threatens the United States' global competitiveness. The BPSAA, which represents over 500,000 technology professionals & enthusiasts, has meet with the Office of Senator Lummis', a visionary on Capitol Hill, to collaborate on regulation and taxation strategies that will enable the USA to be world leader newest emerging technology.
DOVER, Del. - Rezul -- The BPSAA is pleased to report on its recent meeting with the Office of Senator Lummis and her State Policy Director Mr. Tyler Lindholm. It is worth noting that Mr. Lindholm has personally drafted more cryptocurrency regulation and framework for the State of Wyoming than any other Elected Official in the United States and possibly the world. His direct contributions have established Wyoming, without question, as the global leader for pro-technology, pro-cryptocurrency endeavors, even exceeding the Country of Switzerland's pro-business environment.

The meeting between the two groups lasted over an hour and covered many subjects, with a focus on how to create a regulatory environment in the United States that encourages innovation, not suppress it. China recently banned cryptocurrency opening the door for the USA to take a leadership role in the most important new technology since the advent of the Internet itself. However, the recent passage of H.R.3684 - Infrastructure Investment and Jobs Act - as it stands, simply would destroy this opportunity.

More on Rezul News
"The language of the Infrastructure Bill is an attack on the crypto industry and could put the United States at a disadvantage to other Counties that embrace this technology. Even worse, as it is written today, it is impossible to implement", stated Chris J Terry, Board Member at the BPSAA. Mr. Terry continued, "When we saw the final language in the Bill, we reached out the Senator Lummis, as she is one of the few people in Congress that understands the technology. Her Office immediately replied and asked us to work with Tyler. The meeting was excellent, the BPSAA looks forward to further discussions with both Mr. Lindholm and the Senator to fix the broken legislation."

Mr. Lindholm was quoted, "H.R.3684 absolutely is not what we wanted for this new industry. The good news is we have time to fix it. We look forward to hearing from the BPSAA and its half-million followers as we move forward to fix the Bill. They can help bring attention to and educate the other members of Congress and leaders at the State level from the bottom up. Crypto technology is the future we must support."

The meeting between the parties was recorded and a podcast will be released soon. Please visit the BPSAA website for more information on the meeting.

The "Blockchain Privacy, Security & Adoption Alliance" (BPSAA) Foundation is a pending non-profit Corporation that serves to educate the public on privacy and security in blockchain and cryptocurrency.  Additional focus is to unite dedicated, high quality project teams.  Each member organization must have unique technology and be bound by the fervent belief that cross-platform cooperation will synergistically offer value-added features to the development of new fintech solutions. Members of BPSAA are driven by a common ethos: interoperability amongst all. We set the standard for blockchain cryptocurrency collaboration and innovation with the ultimate goal of becoming the industry's leading organization helping set global standards and excellence.  The BPSAA has over 500,000 followers with 1000's joining every month.  To see how the BPSAA can help you or your organization please visit https://bpsaa.vision for more information.